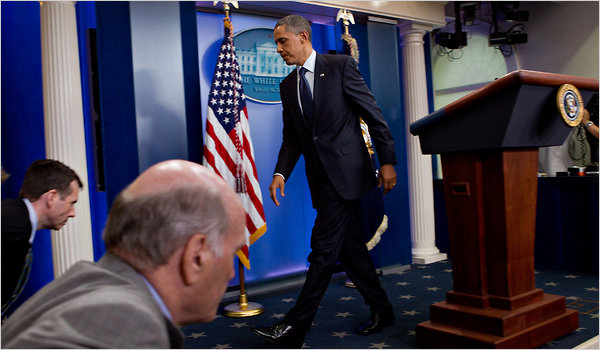 You may have heard that Speaker of the House John Boehner has announced that without an agreement to big cuts in Federal spending the Republicans will not permit the raising of the ceiling on U.S. debt. This would mean that the government would be unable to pay its bills and would default on its loans, with economic panic and catastrophe likely to follow. It's an interesting bargaining strategy, roughly like trying to win an argument with your spouse by saying that if you don't get your way you will drive the car off a cliff with both of you inside it. A bit risky, you think?

Ah, the debt ceiling. In simpler times, it was a source of entertainment for people in Washington…and practically no one else cared. Those were the days.

When the U.S. government runs a deficit, that borrowing is added to the national debt. Unlike most countries, the U.S. puts a legal ceiling on the total debt. But since there has been a Federal budget deficit in all but four (1998-2001) of the last forty years (see Table 1.1),the debt has increased almost every year, and eventually the ceiling has had to be raised.

This gave the party out of power a chance to embarrass the party in the White House, by making speeches about fiscal responsibility and refusing to vote for the increase. All good clean family fun, but everyone knew it was a charade: the increased borrowing was for spending that had already been approved by Congress, and no one was willing to risk financial apocalypse by refusing to pay the bills.

That's the way it stood until the freshman Republicans in the House arrived in January. Now Boehner is saying that while it would irresponsible not to raise the debt limit, it would be even more irresponsible not to do something about the deficit. We're hearing again about future generations, and how they will thank us for cutting spending on education and infrastructure and, if you're now under 55, your future Medicare benefits (or is that last one on hold?).

Boehner surely knows that the debt problem wasn't created by the Democrats alone. Even if he somehow missed the $3.2 trillion increase in the debt ceiling under the administrations of Ronald Reagan and George H.W. Bush, he was in Congress when the administration of George W. Bush got increases in the ceiling on seven separate occasions, totaling $5.4 trillion (see Table 7.3 here). The current national debt is $14.3 trillion, meaning that the last three Republican administrations have accounted for 60 percent of it.

Some of the newbies in Congress, however, remain blissfully innocent (or, to be less polite, stunningly ignorant) of this history. Rep. Mick Mulvaney of South Carolina has already had his fifteen minutes of fame by telling The New York Times that increasing the debt ceiling was Democrats' problem: "It's their debt. Make them do it. That's my attitude."

So hold onto your hats. It's going to be an interesting ride. Let's hope it's not over a cliff.