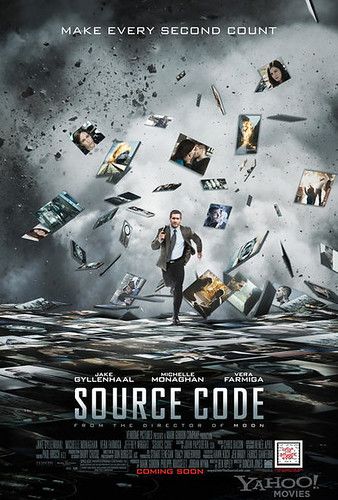 We've all encountered motion pictures that have their own set of rules that exist as an explanation for inevitable plot implausibilities, which in turn are spawned by unnecessarily complex backstories that clog an already engaging plot in attempt to crank up its intellectualism. While we're in a state of excitement as we watch, we're then left still wringing our brains like a washcloth while the closing credits roll, and ultimately feel like a dope for not getting the gist of it all (while, naturally, assuming everyone else has).

Source Code is not immune from this category, but it's more than forgivable because it doesn't thump its chest with pride over its pretentiousness. Strip it away and we still get a wholly engrossing film, thanks to sharp direction by Duncan Jones and a wonderfully engaging performance by Jake Gyllenhaal as Colter Stevens, a decorated pilot who wakes up and finds himself aboard a Chicago commuter train. Sitting across from him is a lovely young woman named Christina (Michelle Monaghan, with not much to do here). Not only does he have no idea who she is, he doesn't know where he is or what he's doing on the train in the first place. The last thing Colter remembers is flying a mission in Afghanistan. As if that wasn't enough, he's also shocked to discover the strange face staring back at him in the train's restroom mirror. Not only does he look nothing like Jake Gyllenhaal, the ID in his wallet identifies him as a teacher named Sean.

Then the train blows up in a huge fireball, killing all aboard, but Colter awakens unharmed inside a small isolated pod in his flight gear. Of course, he's unsure as to why he's in here ("Where am I?" he inevitably asks), as well as the mysterious uniformed woman whom he sees addressing him through a small monitor. This is Colleen Goodwin (Vera Farmiga), whom he believes is spearheading some kind of military simulation in which he's whisked back onto the train, where he has eight minutes to hunt down the bomber responsible for the explosion before it reoccurs.

The action plays out like a live-action video game, as Colter is repeatedly unable to find the suspect before having to start over after each ensuing blast, but he discovers key clues in the process and tries to put them to use in subsequent reattempts. He soon learns that the bomber is planning a more massive attack on Chicago if he's not soon fished out and caught.

Colter soon learns from Goodwin's superior, Dr. Rutledge (Jeffrey Wright), that he's a guinea pig in a government experiment called the Source Code, a program that enables the crossing over into someone's identity during the last eight minutes of his life. It's essentially a violent, futuristic Groundhog Day. Why only eight, though? And why can Colter, and not the other passengers, remember details from every previous episode on the train while going into the next eight? And is the ending quite the copout?

Ben Ripley's otherwise intelligent script doesn't give his hero the best detective skills, either: Colter discerns that since the explosive device onboard (located in the bathroom, where else?) is activated by cell phone to detonate once in the vicinity of a freight train, the bomber must know exactly when both trains will interact. This is not possible unless the suspect is somewhere up above in a helicopter, since he certainly wouldn't be able to see anything at ground level.

All this aside, Source Code is a proficient find-the-bomber suspense tale, though it is a tad predictable to have a larger-scale attack looming ahead; the suspect could've just put all his eggs in that basket instead of bothering with a few hundred passengers on a commuter train.

Colter's desperation is palpable as he carefully observes the passengers in attempt to weed out his target, even though we already know the first few people he singles out are going to be Law and Order-style red herrings. Gyllenhaal imbues his character with vital humanity in the otherwise cynical and dispassionate surroundings of his train car (including an ill-tempered stand-up comic whose own small denouement at the end is a delight to watch). He begins to develop feelings for Christina the more he interacts with her, and is also incensed at the lack of answers from his superiors in regards to the experiment, which makes him weary in body but never in spirit. The decision to not have Gyllenhaal go down the predictable action-hero route more than enough compensation for the overcomplicating of the storyline. Now if there were only a real-life Source Code experiment to determine why he signed on to last year's wasteland that was Prince of Persia.