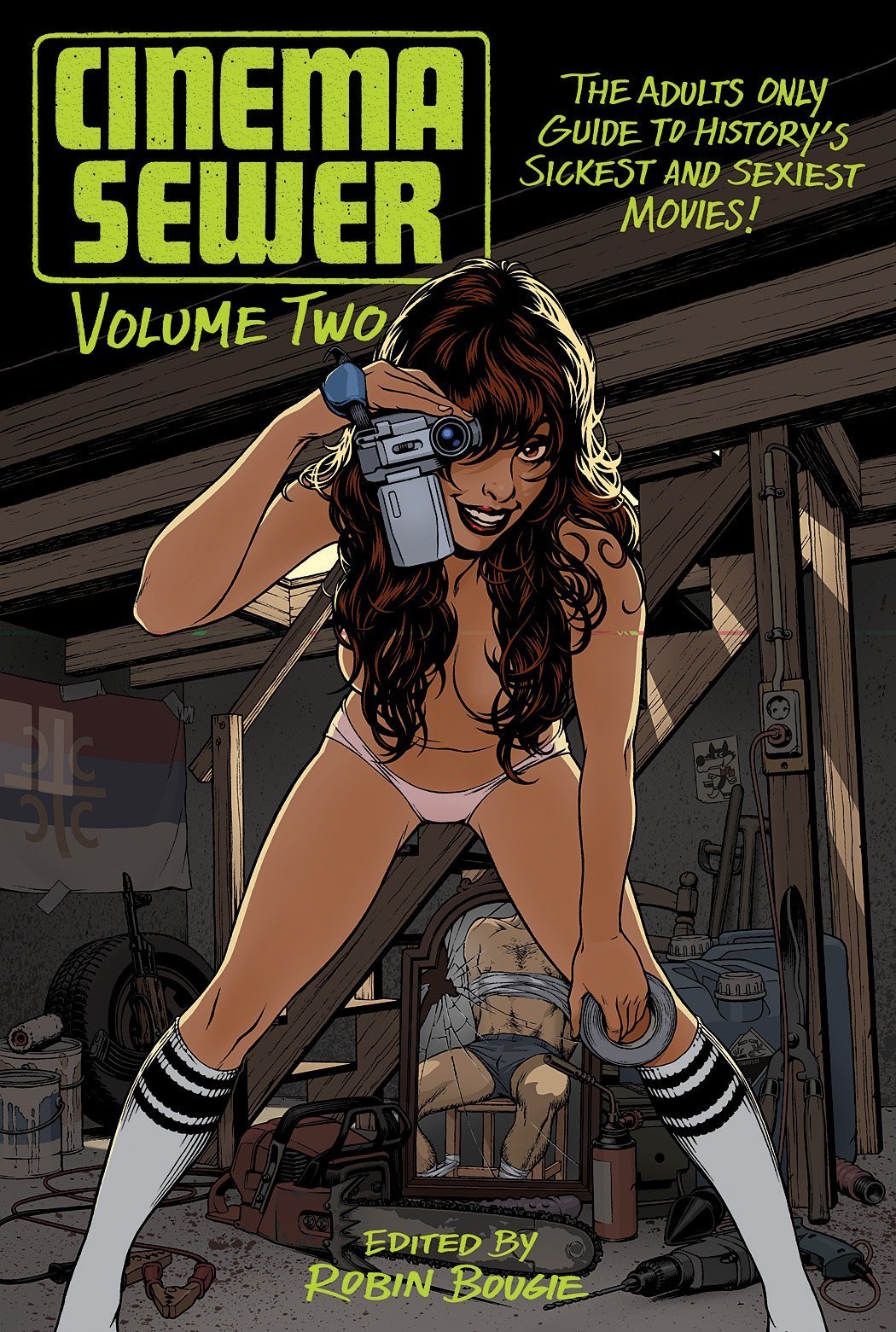 Produced way up in the Great White North (well, okay, it's actually on The Grey And Rainy West Coast) is one of the most off-beat and idiosyncratic cult movie magazines you are ever likely to come across. Edited, written and drawn (yes, drawn) by Robin Bougie, each issue of Cinema Sewer is crammed full of articles, reviews and reminiscences of some the all-time sleaziest, grossest, most exploitive and most without-redeeming-social-value films that have ever seen the light of day (or, rather, the dull, indoor light of cheesy B-movie palaces the world over).

With a home base in Vancouver, British Columbia, Canada, Robin Bougie seems to have made it his life's work to watch and document the most extreme examples of cinematic exploitation from all over the world. Horror movies, soft and hard-core pornography, blaxploitation flicks, mondo documentaries, "snuff" films (there really is no such thing but, oh, how it used to draw them in at the box office!) and cult movie fare of every kind, once thought forgotten, are given a second life through Bougie's vibrant prose and vivid cartooning. Bougie fills each issue with page after page of (mostly hand-written) reviews, accompanied by vintage advertising and long-forgotten stills. Rounding out each issue are some delightfully bizarre (and sometimes X-rated) comic strips by Bougie himself, as well as such guest stars as Colin Upton, Danny Hellman and Mike Hoffman (as well as the editor's wife, artist Rebecca Dart).

It's almost a miracle that Bougie has had access to as many of these wondrous examples of extreme cinema as he has, being that he resides in Canada, a country known for its somewhat over-protective border agents. (To this day, the country still issues a quarterly list of admissible and prohibited titles… about 99% of which will probably find their way into Cinema Sewer's pages if Bougie has anything to say about it.) Movies and books with overtly violent or sexual content are routinely denied access to Canada but thanks to extreme cult movie fans like Bougie they still manage to sneak in.

Even though they are loosely-structured each issue of Cinema Sewer seems to have a theme. Recent issues have been dubbed "The All Horror Issue", "Rollergirl Riot", "Radioactive Raunch" (featuring an extended feature on one of my own personal favorite movie genres: the Post-Apocalyptic Film) , "Shocking Times Square Special" and "Smut and Exploitation". Besides his always-amusing personal opinions and frank, no-nonsense reviewing (this is not one of those publications that hesitates to print a negative review lest they incur the wrath of an advertiser), Bougie also provides a lot of background detail and trivia that you don't usually see in the mainstream press (i.e. Thora Birch's porn star mom).

There are a plethora of cult movie magazines out there especially now that DVD producers have learned how big the actual market is for non-mainstream product… but none dive as deep into the miasma of cinematic sleaze as Cinema Sewer and long may Robin Bougie reside in its depths.